Ciwt's local paper did a spread on soups today.  In concentrating on copying them Ciwt - who Loves! soups - found they don't photograph all that appealingly.  Which brought her mind to soup Tureens, which she also loves and photograph much more handsomely.

The most expensive on record was this Germain Royal Soup Tureen which sold at Sotheby's 13 November, 1996 for $10,287,500 million.  It was designed by French silversmith Thomas Germain in the Rococo style popular at the time, made in 1733 as a gift for Louis XV and weighs 30 pounds. Besides quality, it's price is surmised to relate to the fact the tureen is one of the few remaining Parisian silver soup tureens and therefore very rare.  Sotheby's described the tureen as "an object steeped in history, that survived the melts ordered to pay for the Seven Years' War and the French Revolution."

But Ciwt found herself more attracted to this superb rectangular hand chased sterling silver tureen by Dominick and Haff, circa 1881. 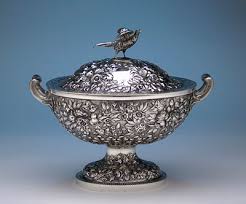 But then there are these beauties.  Oh dear, what is Ciwt to select with her millions?
Posted by Ciwt at 7:58 PM