Ciwt returns today to the Bedouin tent and a few facts about Bedouin culture.  Why?  Because hopefully her readers will see Theeb, the movie Ciwt saw Sunday, be as deeply impressed as her Cinema Club audience was, and curious to know more about these people.

Theeb revolves around the Bedouin male honor code of  courage, courtesy, hospitality, protection, and justice which is so admirable it is said the Knights of the Crusades brought it back to their lands as the basis of Chivalry.

The women too have strong social roles, one of which is using ancient and highly skilled techniques to weave the sturdy utilitarian fabrics that make the mobile Bedouin desert life possible.  For centuries they have woven tent fabric from black goat hair sometimes combined with camel hair. In wet weather the wool expands and becomes water tight, its thickness is a wind guard even in the frequent powerful sandstorms, and in heat the sides can be rolled up allowing breeze.  The fabric and poles are packable within an hour and their light weight allows them to be easily portable.

Equally ingenious in its simple functionality is the loose flowing cloth the women weave for Bedouin clothing. It both covers the skin and allows air to flow around the body thus preventing sunburn and heat stroke. It also makes up into the iconic symbol of the Bedouin, the Keffiyah, large folded cloth secured on the head with a cord or Agal. This simple garment shades the face from the sun, allows air to flow freely around the head and can be wrapped around the nose and mouth in case of a sand or dust storm. 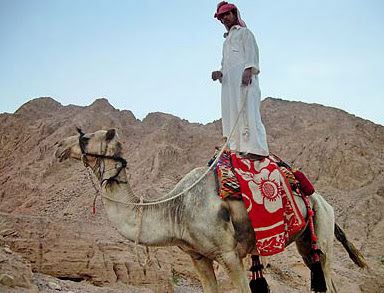 (Also notice the saddle blanket and other gorgeous woven tack on the camel). Who can forget Peter O'Toole striding proudly in his Keffiyah or those penetrating clear blue eyes beneath his Agal in Lawrence of Arabia?

Not shown in Lawrence or in Theeb are women, who raise the children, herd the sheep, milk the animals, make the clothes, and are fiercely protected according to the codes - both male and female - surrounding them.  Also not in either movie were falcons and Saluki greyhound dogs which the Bedouins are credited with breeding.   In Lawrence but not Theeb were the magnificent Arabian horses the Bedouins were the first to breed.

Theeb introduces the viewer to the importance of story telling, poetry and music to the Bedouins , their refined and many uses of pottery,gems, coins and metalwork for household objects

.  It is clearly a strong, deep and rich ancient culture.


No, Theeb is not a documentary.  It's a powerful, assured, Kurosawa-type adventure set in 1916 Bedouin/Lawrence of Arabia country by an Oxford born, Jordan and UK-educated, Sundance-trained Arab filmmaker Naji Abu Nowar. And lest you think Ciwt is a bit over the top, Nowar has taken home Best Director awards from several prestigious film festivals, and Theeb is being predicted to win Oscar for Best Foreign Film. (official trailer)

PS - If you don't go to Theeb, or you do and don't like it, you will still be Ciwt's friend.