Ciwt is no scholar of Goya.  She respects some of his beautifully executed art, but from what she has seen, she doesn't think she would have liked him as a person.

For one thing he seems self-involved, perhaps arrogant and certainly demanding of attention. In the portrait of the Count and Countess of Altamira's young son Goya has placed his own calling card in the pet magpie's beak.  And, even more overtly in another work, he placed himself visibly in the midst of the Spanish Royal Family

But then over a century earlier, in 1685, Velasquez painted himself into an earlier Spanish royal family in the much more charming 1685 La Meninas 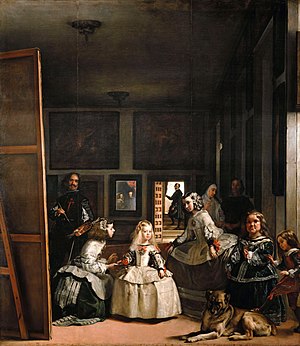 .
So the deeper reason why Ciwt would not have wanted his company was that she finds him untrustworthy, subversive.

What are those cats doing in that child's portrait?  And look at their eyes, riveted menacingly on the 'little red boy's' pet bird.  Under the guise of capturing the purity and youthfulness of this young royal Goya has put the bird he loves (and by extension his innocence and protection) close to mortal danger. Clearly Goya is referencing the fleetingness of life.   Some scholars have speculated that the portrait was painted after the child's death, but why he included this line of thought is only known to Goya.

Even more subversive it seems to Ciwt is his portrayal of the royal family - for whom he is the Court Painter.  In other words, King Charles IV was his employer.  Traditionally royals are commemorated as ideally as possible - in many cases essentially falsifying their real looks in favor of more beauty, more height, more gracefulness, fairer skin.  But not Goya in this painting which includes a large mole on the face of one royal 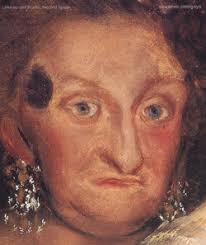 , shows another's head turned away from the canvas, positions the Queen more prominently than the King 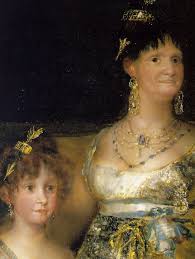 and gives the finery and glitter of the royal jewels, silks and adornments more artistic attention than the very ordinarily painted humans.

The wonder to Ciwt is that Goya got away with these things which makes her think he must have had great personal charm and charisma.  So, maybe she would have enjoyed meeting him after all...