Hats are on CIWT because they are the artistic, historical, socio-economic subject of a thoughtful, well researched and lovingly presented exhibition currently at the Legion of Honor: Degas, Impressionism and the Paris Millinery Trade.

One aspect of the millinery trade - among many - is its liberal use of decorative adornments.  Three types easily come to mind and elicited different degrees of reaction from Ciwt.  The most difficult, and there is literally no other way to put this, is The Whole Bird. 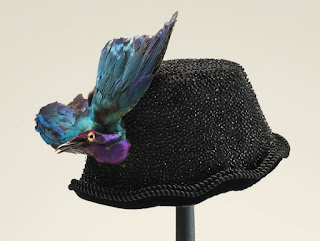 The news here is too grim for Ciwt to recount - easily billions of birds as the middle class prospered, began emulating the fashionable elite and women's hats became larger and more lavish.  Eventually societies for the preservation of birds were founded, including the Audubon Society in America and the English Society of the Protection of Birds.  Strongly criticizing the French millinery trade in particular, they struggled to enact laws as well as re-educate the public, particularly women, through public lectures, periodicals and books.  Thus they played some part in ending 'The Age of Extermination' by World War I when more practical styles came into fashion.

As if this wasn't bad enough, the birds were preserved in such poisonous chemicals as arsenic acid which, if they didn't kill the millinery workers outright, led to severe physical and mental conditions.
The phrase  "Mad As A Hatter" was not invented by Lewis Carroll for Alice's time-challenged rabbit but was descriptive of an actual phenomenon in the hat trade. 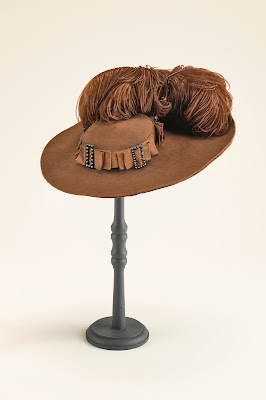 Still imperfect but mercifully less upsetting for Ciwt as adornments are feathers.  To be more specific, plumage that could be safely removed from birds - or, better yet but not as frequent, molted naturally.
Ostrich plumes fit this bill and those from African ostrich farms posed no issues with conservationists.  Whew, thinks Ciwt because this is one of her favorite hats in the show.  Simple, tasteful, elegant lines, rich color with that lovely soft touch of plumed femininity. 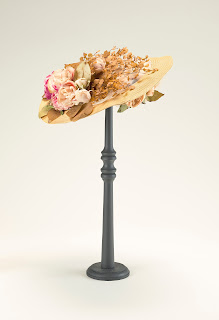 Last and most agreeable in the large adornments for hats department are flowers.  All artificial! And so artfully rendered.  The production of flowers from silk, cotton, velvet and paper was a large industry in Paris. By the 20th century an estimated 28,000 artificial flower makers were working in the city and swelling the ranks of newly liberated women.

The Fine Arts Museums have begun to accompany selected exhibitions with free on-line, interactive and excellent introductions they call "Digital Stories."   Ciwt lifts her hat and highly recommends the Paris Millinery Trade link for those wishing to see and learn more about this important and complex aspect of fashion, social and artistic history.