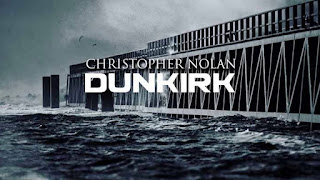 Ciwt doesn't know what to say about Christopher Nolan's Dunkirk.  It is an ambitious war movie spectacle by a famous director about one of the most triumphant military retreats in recorded human history. And, somehow, Ciwt could have easily left after ten minutes.  There was a lot of brutal, harrowing action but minimal personal engagement for Ciwt.  The movie is stark, terrifying and arty/poetic at the same time.  Ciwt could feel the mind of the director but couldn't exactly feel for the characters and multiple plot lines that appeared, then went away, then came back.

Maybe this was because Nolan assumed Ciwt and all viewers were already intimately familiar with the "Miracle of Dunkirk'" which is legendary in England.  If you already know what the Dunkirk 'deliverance,' (for lack of a better a word) is all about, then that poetry might be exactly the way to touch your heart in the deepest way.  But if, like Ciwt, you are very familiar with the name Dunkirk but not with the evacuation "Miracle," then you need more specifics, less technique.

Or something. Ciwt was so busy making linear sense of all the cross-cutting while being dazzled by the close-up particular scenes, she cared but couldn't really get into the movie as a whole. Actually, it was sort of a gift not to be that involved because, gawd, what horror - and heroism.