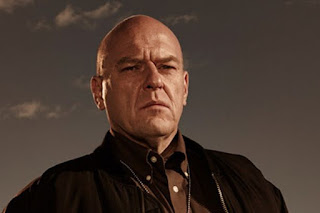 
Breaking Bad viewers know exactly who Ciwt has pictured above.  To 'console' herself after losing her cat, Callie, Ciwt began binging on BB, which she had never watched.  She certainly knew going in the series is widely regarded as the best TV show ever but, even so, she wasn't entirely prepared for its consistent quality at every level from writing, to acting to directing, to cinematography, you name it.

Also - frighteningly - its unpredictability.  Viewers go in blind - and even the cleverest of them can't figure out what is coming.  Sometimes the episode is slow, menacing, setting a scene, developing or deepening a character, sometimes it is shocking, unnerving, violent.  But absolutely nothing prepared Ciwt - or critics and viewers in the millions on 9/15/13 when it was it first aired - for Ozimandias. Stunning, gut wrenching, making reveals heartlessly and waaay sooner than reasonably expected (if expected at all).  Listen to critics and viewers:  "the hardest tv episode I have ever watched," "pretty much put the nail in the coffin for viewers holding out hope..," "the greatest Breaking Bad episode Ever.....," "can't get out of my chair...," "can't stop crying..."

Ciwt could go on with the quotes but she'll let reviewer Nick Harley have the last word:

I cannot think of a single thing that I have ever watched on television that was as good as tonight’s episode of Breaking Bad. Of every television show, series finale, made for TV movie, television broadcast of major motion picture, sporting event, and award show, there is not a single thing that I can point to that kept me in such utter suspense and captivity. For the duration of "Ozymandias," my mouth was agape in pure shock.