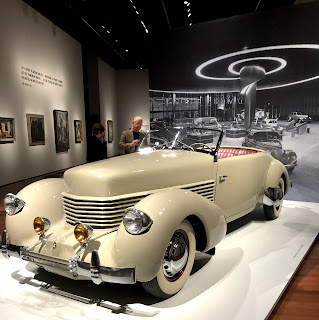 Ciwt can't quite put her finger on why the 'Modernist' American art from the 1910's through the 1940's gets her down.  Its streamlined, futuristic look was everywhere: deco buildings, clocks, radios,
movies (think Charlie Chaplin).

This car presently starring in the de Young "Cult of the Machine' exhibit offers her some clues. Normally Ciwt is quite dazzled by fine automobiles.  But this one's distinctive, boxy hood was proudly advertised as 'coffin-shaped.' And its doors were known as 'suicide doors' because it was easy to fall out of them. So easy they were especially popular in the gangster era supposedly owing to the ease of pushing passengers out of moving vehicles. 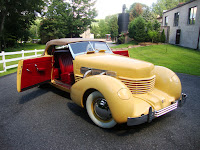