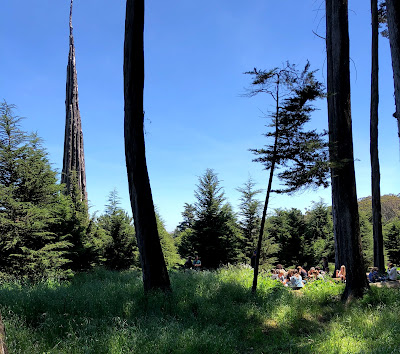 So, after seven years Ciwt can't remember if she's told you the one about the introduction of Andy Goldsworthy's Spire to the Presidio Powers That Be.  They laughed their heads off.  Spire was still in the idea stage and, as far as the Presidio was concerned, it could stay right there.

The Presidio had recently been demilitarized after over 200 years as an active base and the brand new Presidio Trust was tasked with making the spanking new Presidio National Park economically viable.  Spending money on an artwork was considered ludicrous.  "What does art have to do with a park?!" they hooted.  "No way!" "Hahahaha, Etc."

Somehow some persuasive soul or souls prevailed and convinced them to go ahead with the art project.  Spire went up in early 2008 and from the very day it was erected, it became THE most visited site in the Presidio*. Since Spire, Goldsworthy has been commissioned to add three more site specific sculptures to the Presidio And there have been several recent Goldsworthy sightings.  Considering that he lives in Scotland, it is very probable that there may be a new Presidio Goldsworthy in the offing.


*When Ciwt was there today, there were several large groups of very respectful young people lunching together at the base of Spire.  She's sure Goldworthy would be pleased and even might enjoy having a last laugh. 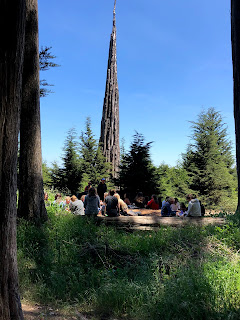