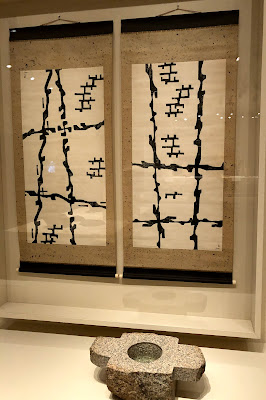 
The days start dwindling and running together this time of year so Ciwt is offering a two days for one CIWT from the Asian Art Museum's current show of two artists born continents apart who became intense, formative friends during their brief time together. In 1950 Hasegawa, an established Japanese artist, was assigned as guide and interpreter to Noguchi when he was in Japan forming his artistic ideas. Each was concerned with the role of Japanese culture after World War II with Hagegawa feeling that Japan must now embrace both the old traditions as well as new and outside ways while, at the time, Noguchi felt Japan should look almost entirely to its own history and traditions and esckew the West.  Through rich conversatoins the two became each other's teacher, and, each in his own way, came to embrace the philosophy that "the strength of tradition lies in its adaptability to continuous change." (Noguchi, 1963)