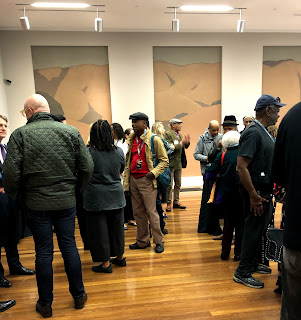 The exhibition Soul of a Nation: Art in the Age of Black Power 1963-1983 has legs.  It started in 2017 in London (Tate) and has traveled to Arkansas (Crystal Bridges Museum) and New York (Brooklyn Museum). It was meant to stop there, but word of mouth was so strong that West Coast museums made all efforts to bring it out here.  L.A. (Broad) first and now here in San Francisco (de Young Museum).  At last! Ciwt might add given that the Black Panther Party was founded in Oakland in 1966 and had community offices all around San Francisco, including Ciwt's neighborhood (The Fillmore).

Ciwt had heard about the show but didn't realize that an entourage of the original artists included in the show - basically the ones who are still surviving - travel to each opening.  So, when she walked into the Press Preview, she was happily surprised to see the room filled with them.  Surprise being the key work here.  Eg, she started talking to one of the men about the time of day, that sort of thing. (Actually she asked him whether the sweet potato pie the Museum was offering was good). 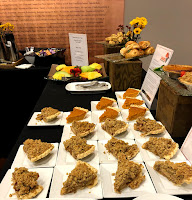 When he went off to get some coffee, his friend who'd been standing next to him leaned toward Ciwt and said "He's one of the most famous photographers in the world.  His name is Herbert Randall." Oh,.....Ciwt stopped talking, quickly ate her first ever piece of sweet potato pie, and started listening as these artists and the show's curators took the press through the exhibiton  - and Ciwt learned that 'his friend' was also a world renown photographer.