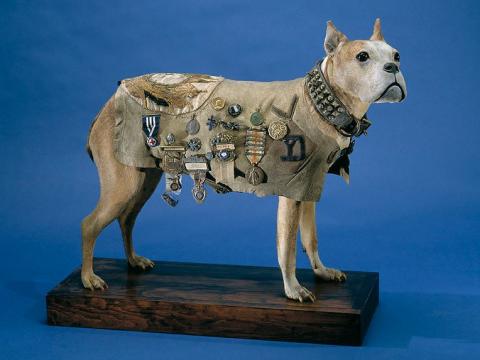 Sergeant Stubby, the most decorated dog of World War I, captured a German spy and outranked his owner.

In 1917, a stray puppy wandered onto the Yale University campus, where members of the 102nd Infantry Regiment were training. The pit bull mix won over the unit with his antics, participating in drills and even learning how to salute with his right paw. Private J. Robert Conroy adopted the dog, named him Stubby and smuggled him to the front lines in France. There, exposure to mustard gas left Stubby highly sensitive to the noxious fumes and able to warn the 102nd of imminent attacks. He also learned to locate wounded soldiers during patrols. One day, Stubby spotted a German spy and attacked the bewildered man until reinforcements arrived; the achievement earned him the rank of sergeant. In his 18 months of service, Stubby participated in 17 battles, survived a series of wounds and provided a much-needed boost of morale to his fellow soldiers. After the war he returned to the United States with Conroy (who never made it past corporal himself) and became a national icon, leading parades and receiving awards until his death in 1926.

My heroes are those who risk their lives every day to protect our world and make it a better place — police, firefighters, and members of our armed forces. -Sidney Sheldon
Posted by Ciwt at 5:47 PM