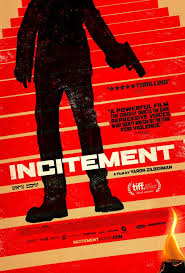 Ciwt's Cinema Club chose to end its Fall 'semester' with Incitement, a long, political movie about the man who assassinated Prime Minister Rabin in 1995.  While it was well acted, gripping  and technically well done, Ciwt found it to be a 'so, who asked?'  bully pulpit for a director having his say.
She also felt mildly irritated her Cinema Club put members throught another downer and more (mid-East) politics (after last week's Clemency about death row) going into the holidays.