Maybe if the painting above was in the current deYoung Museum exhibition, Ciwt would have known who Faith Ringgold is.  It is the one that was positioned right next to Picasso's masterpiece Les Mademoiselles d"Avignon (1907) at the expanded MoMA reopening in 2019: 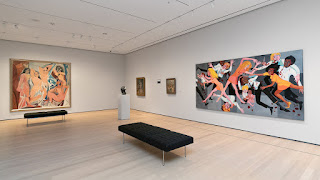 In a curitorial decision that was termed "genius," the justaposition of the two works painted 60 years apart, one by the famous Spaniard man and the other by a Black woman, received enormous international attention.  And Ciwt's.  When she and friend lucked into early admission on reopening day, Ciwt had the huge, hushed gallery to herself and was nearly overwhelmed by the direct, audacious and ferocious energy of both paintings.
The other day though at the deYoung Press Preview, Ciwt didn't make the artistic connection to Die or Ringgold.  She actually asked the visiting New York curator of Faith Ringgold: American People, something along the lines of how well known Ringgold is. Who knows what he was thinking, but he nicely answered that, well, among Black artists she was on a level with James Baldwin, Tony Morrison, Gordon Parks, Nina Simon and others of the most influential and famous.  Oh......
Faith Ringgold: American People  is an extensive(and belated)  retrospective of Ringgold's work and bears many return visits.  In a variety of medii from large to small paintngs, quilts, mannequins in Ringgold-sewn clothes, Ringgold tackles head on the times she and we lived and live in.  From the steamy Harlem summer of race riots, the marginalized history of blacks in the U.S., and also their music/fun/partying/bonding/traditions, mothering, the mother-child bond, identity issues and, most important for Ringgold, the forminable (nay, essentially impossible) task of women artists achieving prominence and recognition.
Ringgold was as good if not better than her male contemporaries but was denied museum inclusion and relegated to teaching art and making and promoting her own art privately.  When she went to Europe and saw the whole sweep of European art, she realized this marginalization of women had been going on from the beginning and her art subjects expanded from Harlem to Europe to Africa and into masks and "women's crafts."
Each of Ringgold's 'eras,' passions, medii is given a separate room, and each room warrants the viewer's attention and care.  This American People show is not one to rush through.  Nor does it ever back away from startling, finely crafted, soulful, directness.  The kind maybe you, like Ciwt until the other day, have only seen in Die- or Picasso's Guernica (1937) the painting that inspired a young Ringgold on one of her trips from Harlem to MoMA.