There are places where San Francisco loses its coastal feel and turns East Coast or Midwestern.  One of my favorites - maybe because it is the closest - is Mountain Lake Park.  It has all the ingredients I remember from walking to watch my younger brother play Little League Baseball in a little park a few miles from our house.  Playground, baseball field with little boys swinging bats at least as long as they are, tennis courts.  It also has the largest fresh (?they're working on that right now) water lake in San Francisco (maybe beyond; I'll have to research) and a small beach where the ducks, gulls and other birds that aren't in the water walk among the picnicking/sunbathing families and children building sand castles and wading.

Among these birds for many years was a huge white swan named Myrtle who began by discreetly hiding in the reeds on the far side of the lake. But as the years went by, perhaps because she realized the beach was a bonanza of food scraps, Myrtle came out of the reeds and onto the beach much to the delight of the grownups and children. After a while, for her own swan reasons she occasionally nipped at a child or two.  This was tolerated because Myrtle was an institution by now.  But eventually she began leaving the beach altogether, running up onto the lawns and playgrounds, hissing and nipping at everything in her path.  I believe bird behaviorists were sent, but, one morning Myrtle was gone.  Turns out the powers that be relocated her, but the even more powerful powers (parents, etc) used their clout to have Myrtle returned.  So, return she did, and resume her aggressions she did, racing after children at breakneck speed until finally, quietly it was agreed that Myrtle would leave for good.  I don't know where she went; another thing to research.***

A few distinctly San Francisco aspects of Mountain Lake Park: 1. Its 14 acres were designed @1875 by William Hammond Hall who was influenced by Frederick Law Olmstead and who designed Golden Gate Park  2.It was once inhabited by a white alligator.  Nobody is sure how it got there but it certainly was a surprise, and removing it became quite a famous event because the editor of our paper, The Chronicle, a former Navy Seal married at the time to Sharon Stone, decided to save the city from this threat.  His mission was not a success although local reporters had a blast with it, and the alligator was removed by animal control whose job it actually was.  I don't know what happened to the alligator either. 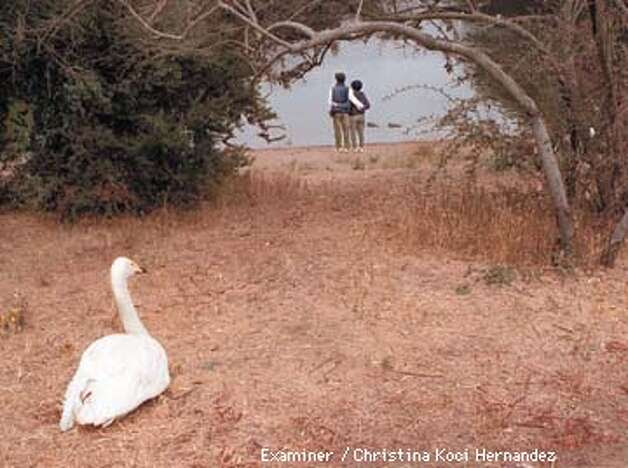 Myrtle deciding what to do with all this tranquility.

***
My telling is apocryphal, according to the word around the neighborhood at the time of the events. For more factual accountings, here is a 1997 biographical article about Myrtle from The Chronicle:  http://www.sfgate.com/news/article/Feathered-friend-on-the-mend-3239920.php

And here's The Chronicle's 1996 accounting of the gator's removal: http://www.sfgate.com/news/article/The-Tale-of-the-Mountain-Lake-Monster-As-the-2967233.php