Turns out the saying is as illusory as that gold. As far back as the 17th C. the Irish knew that rainbows were formed by the sun and therefore circular and never-ending.  So they were fond of saying that you would be as likely to find a pot of gold as to find the end of a rainbow.  Somehow this expression was changed and became incorporated into leprechaun fairy mythology.  Maybe it was a leetle trick those devilish creatures played twisting the saying to mean the leprechauns spent all their time busily making shoes and stored away all the coins they earned in a huge pot of gold hidden at the end of the rainbow. 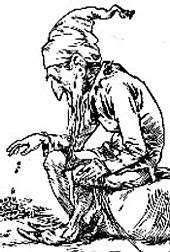 A leprechaun counts his gold in this engraving c. 1900