At Ciwt's first school, French was taught beginning in 2nd grade, so certainly she - like everyone knows what a hotel is.  Yet, when she went today to a lecture on 18th C French architecture and furniture she became confused because every example of every salon was in a hotel.   Hotel de Soubise 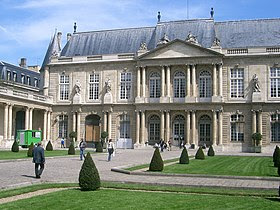 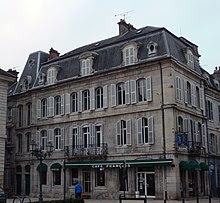 She kept trying to reason why.  Why did all the aristocrats live in hotels? Or, why were hotels so lavishly appointed?

Finally she asked a curator and turns out what we think of as town house or chateau or mansion in the 18th Century was a hotel in French cities.  Hotel particulier to be exact.  Apparently French aristocrats spent so much time in the country (if well enough established, in Versailles at court) that their townhouses were run as hostels or hotels with a permanent staff which treated them as important guests upon their occasional visits to the city.  Inns in England were originally the same thing: individually owned aristocratic residences.  Then there was evolution: hotels became our hotel but hotels de ville were town halls and the Hotel des Invalides was always a hospice for the war wounded.  And, when we add England to the equation, terms become more complicated.

Perhaps more if/when Ciwt can wrap her mind around this semantic puzzle.  For now, bon soir.
Posted by Ciwt at 6:49 PM