Having 'lived with' her visit to Mark di Suvero's works on temporary exhibition at Crissy Field, Ciwt is feeling removed from a full and relate-able understanding.  This goes partially to Ciwt's more limited grasp of the history of sculpture and knowledge of the demands involved in working with large slabs of metal.  But the immense size of di Suvero's works comes into play as well, and Ciwt is sure the most important thing she did was to come close, to ground level with the works where she could get a truer sense of the weight and scale that is such an integral part of their essence.

di Suvero began showing in the late 1950's and is one of the most important artists to come out of the Abstract Expressionist movement that included artists such as Franz Kline:

.
He was a pioneer in using technology to work with steel. 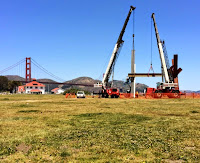 And he is known as an activist for peace as well as artistic causes.  His sculpture Mother Peace is included in the Crissy Field installation and on display in the Bay Area for the first time since its removal was forced by controversy which ensued when it was displayed - with its prominent peace symbol -in front of the Alameda County Courthouse in 1974 at the height of the Vietnam War. 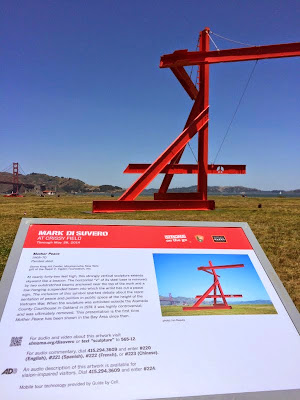 Clearly Ciwt realized as she walked around and between the works they are meant to be seen close enough so that their 'realness' is encountered.  There is no artifice, no hidden joinings, no contrived shapes. The steel is painted straight-forward or burnished or simply raw. The works are visibly manufactured, man-made, nothing other worldly - man is present. But up close they do have unique presences and personalities.  The energy of Something has been put at temporary stasis. 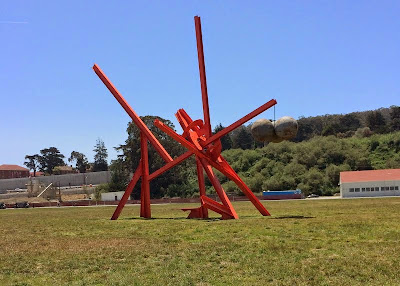 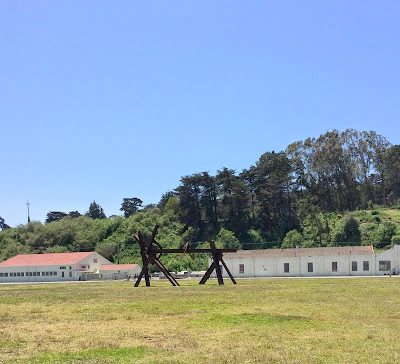 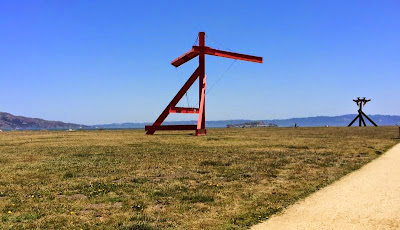 The sculptures come in somatically, you sense them rather than just see them by feeling your own size, weight and scale next to them.  They are immediate and incomprehensible at once.  Not beautiful, human and beyond, here but energetically beyond. Sublime maybe; di Suvero got his degree at Berkeley in Philosophy in which the aesthetics of the Sublime is contemplated.