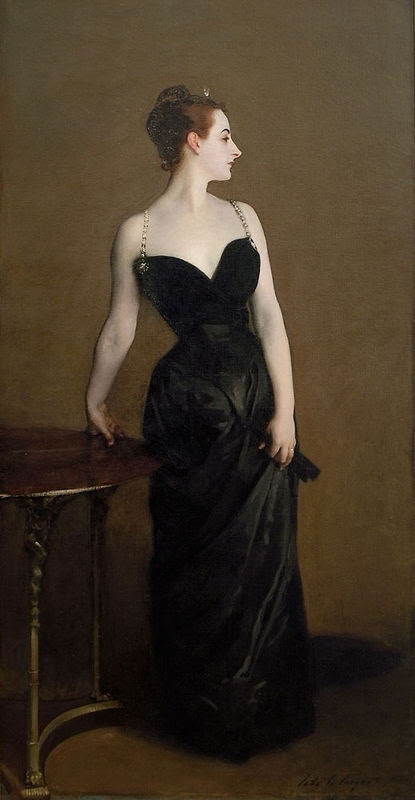 Take for a model a sophisticated, 'professional beauty' socialite in fin-de-siecle Paris.  Paint her large in a provocative pose of a distinctly self-possessed, upper-class sort.  Enter the painting in the Salon and wait for the French bourgeoisie to flock to you, the artist, for portrait commissions.

This was John Singer Sargent's long-term career thinking when he persuaded the equally socially ambitious, ex-patriot socialite Virginie Amelie Avegno Gautreau to pose for him.  She was already renown for her exotic beauty which she enhanced with lavender body powder making the appearance of her skin exceedingly light. But when the portrait was unveiled at the Salon, the Parisians were scandalized, finding the subject tawdry and erotic with her cinched waist, severe profile, haughtily provocative pose and, worst of all, shoulder strap draping down onto her upper arm.  (This last ghastly effrontery was in fact later painted out to assuage the shocked viewing public). The ambitions of both sitter and artist were utterly dashed; Gautreau was humiliated and Sargent was so reviled as an artist that he received no commissions and left Paris in artistic disgrace.

To this day, when lists of the most notorious art works are compiled, Madame X is usually on it.

Of course both parties involved were talented survivors.  Gautreau continued her socialite ventures and went on to have her portrait painted several more times.  One seven years later by Gustave Courtois had all the same elements of Sargent's portrait: face in profile, style of dress, and even the hanging strap.  This time French tastes (for which proverbially there is no accounting) had changed, and the portrait was well received by the public.

John Singer Sargent came to be considered "the leading portrait painter of his generation." And in England and America, ironically, his career was probably established and enhanced by the notoriety of the scandalous Madame X.