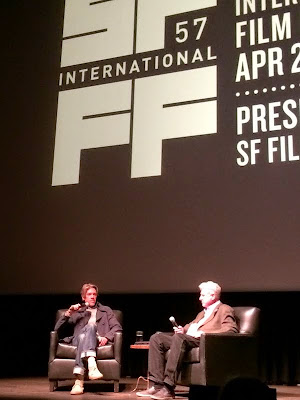 Stephen Gaghan, writer/director of Syriana and writer of Traffic, Rules of Engagement, NYPD Blues, The Practice as well as several other movies and TV shows.  Gagham was awarded the SF International Film Festival Kanbar Award for excellence in screenwriting.

He was interviewed by a film critic before a screening of Syriana and had to struggle not to be too much of "Debbie Downer" as he said.  When his plane landed and moments before going on stage he had learned that one of his films, to which he feels great attachment, had been give a red light when he - his agent, actors, financiers - felt it was a definite 'go.'  This led to numerous answers about the current state of the movie industry being in fact 'downers.'  He says the basic sellable script that keeps getting sold - and in the theaters - at the moment is essentially: Ordinary teenage boy or girl doesn't realize he/she was actually born as a special presence who will single-handedly save the world.  In the course of doing so he/she finds they are actually descended from a father or mother who saved the world before they were born.  According to Gaghan the 'powers that be' are too nervous to go forward with any other type of script.

Darn!  I'm with you Debbie.  Gaghan also said that because of all the above his next move might be out of movies and back into television which is in total ascendancy/receiving strong financial and productive backing.

His advice - when prodded to say something encouraging/helpful to budding scriptwriters - was keep it inexpensive.  Ways to do this are: no night filming, no elaborate, international settings (both of which are very expensive), work with unions to be able to use regular people instead of professional actors as much as possible.  In the course of explaining these things he referred repeatedly to the movie he thought was the most brilliant last year, working with a budget under $1 million.   Ready?  The movie that blew Gaghan away last year was....Frances Ha.*