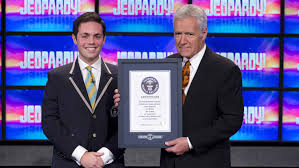 Off to watch Jeopardy.  Alex was a given award on the show recently in honor of the emcee who has hosted their TV show for the longest time.  Makes Ciwt nervous.  Can retirement be far behind?

He says (to Parade): Trebek’s contract runs until 2016, and he hasn’t confirmed whether he will retire after that.

“Everybody’s speculating on my retirement, and I don’t know why,” Trebek told the LA Times. “I’ve given thoughts to retiring…Everybody  assumes from my having said that, that he’s retiring. Well, no. I’ve been thinking about it. So allow me to think about it.”
When he does retire, he added, he’ll go quietly.

“There won’t be any fanfare,” he said. “It’ll be like the time I shaved my mustache on a whim. I’ll just ask the director to leave me 20 or 30 seconds at the end of the program to say a few words and I’ll say a few words and thank people and be on my way.”

Read more at http://www.philly.com/philly/blogs/entertainment/television/20140616_Parade____Who_is_Alex_Trebek_____Jeopardy__Host_Breaks_Guinness_World_Record.html#jeouSEjglyKrIXYm.99
Posted by Ciwt at 6:53 PM