The lovely Mark Rothko (1903-1970) painting from the permanent collection of SFMOMA has a well-deserved place of honor in the current Gorgeous show at the Asian Art Museum (see Day 3/214 for Ciwt's thoughts on that show). Seeing it placed so perfectly for a long meditative viewing put Ciwt in mind of the two other Rothko paintings currently on museum display in San Francisco. They are both at the de Young.

One is, in Ciwt's (Rothko late period loving) eyes, a sort of embarrassment to that museum.  Getting it out of the way:

The other is part of the important Robert and Jane Meyerhoff Collection visiting from the National Gallery of Art in Washington, DC.  It was painted in the year (perhaps months) before Rothko committed suicide.

It is said the Meyerhoffs were after a more colorful Rothko when they went to his studio to buy, but were told by him "This is what I am selling now."

Here are some of the paintings Ciwt saw when living in New York and D.C. after college.  They captured the sun - no the complete energy of the solar system - and were at once soothing and elating, containing joy and, as with all things, its opposite.  All things and their opposites.  Never garish or intrusive, in a darkened room they had captured so much true energy they emitted a soft, ethereal glow. They came, as far as Ciwt could tell, from Rothko's soul and reached hers - as they did many others. Their luminous spirituality often moved people to tears; this deep receptivity included Ciwt and the artist himself.  He was famously quoted: The people who weep before my pictures are having the same religious experience I had when I painted them.  And if you, as you say, are moved only by their color relationships, then you miss the point! 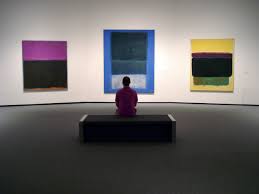 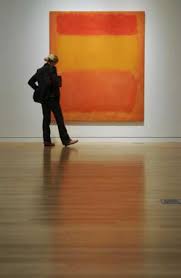 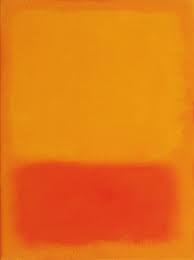 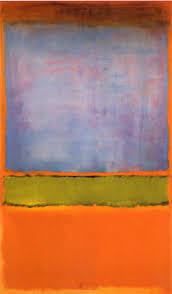 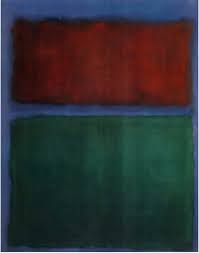 It is this way in which colors were brought together in washes, rough strokes, large and small masses until they became transcendent spiritual and emotional creations that is Rothko's great and unique achievement.  It is this which one who has been touched by his art has embedded in her memory.

So when Ciwt sees one - just one - Rothko painting hanging in the de Young permanent collection and it is from an earlier period when his washy brush work is beginning to emerge but he is still working with European influenced surrealist images and colors, it makes her sad.  Rothko hasn't become Rothko yet in the de Young painting, and viewers who only see this one in a museum setting are, in Ciwt's opinion, being done a disservice. Such a painting would be educational in a retrospective where one could see the entirety of Rothko's artistic development.  But, in this single work case, the uninitiated viewer will likely walk away thinking they know Rothko's work, and perhaps never again encounter or even learn of the creations for which he is best, internationally and deservedly known.

Obviously, there is great sadness for Ciwt and everyone - certainly the artist - in the Meyerhoff Rothko. In 1968 Rothko had been diagnosed with an aortic aneurysm but continued to smoke and drink heavily, avoid exercise and eat unhealthily in spite of doctors' orders. His troubled marriage became increasingly so compounded by his poor health, impotence resulting from the aneurysm, nervousness, restlessness and general sense of agitation.  On New Year's Day 1969, he and his wife separated, he moved into his studio where he painted the Meyerhoff among other works and was found dead a little over a year later. These are the actual facts, but to Ciwt and other lovers of Rothko's pictures, you don't need to know them; his Meyerhoff painting and his other dark ones toward the end tell it all. As the work from the 1950's and earlier 60's captured spiritual life, these paintings capture something akin to spiritual death.  Possibly because Rothko could be nothing but authentic until the end.