Ciwt decided to do a bit of research today on Michelangelo's David (1501-1504) and learned a few things of interest. (There are many so she focused on the statue's early history and placement).

She did not know the marble Michelangelo used for David had been worked on by two other artists.  The first, Agostino di Ducchio, began @1463 to shape the legs, feet and torso as well as roughly block out some drapery and perhaps create the hole between the legs.  He was then dismissed from the project for unknown reasons @1466, and the marble lay untouched in the yard of the Florence Cathedral for 10 years when Antonio Rossellino was commissioned to continue where his predecessor had left off.  His contract turned out to be short-lived, and at that point the marble was left out in the elements for another @25 years.

This was of no small concern to the Overseers of Works of the Florence Cathedral who had originally commissioned the David as one of twelve biblical figures to be placed on the Cathedral's roof.  The marble was from the small and expensive Cararra quarry and the transportation and artistic outlays were already too significant for the marble to continue lying exposed and unfinished.* After expending more funds raising the huge block from its supine position and interviewing with such artists as Leonardo da Vinci and others, they were finally convinced by a very young (age@25) and virtually unknown artist, Michelangelo di Lodovico Buonarotti Simoni, that he had the talent to take the project forward.  He was given a two-year commission in August 1501, began work the next month, and worked virtually steadily for the next two years.

The moment the completed David was seen by church officials and prominent Florentine citizens and artists (da Vinci, Botticelli among them), they knew they were looking at an unprecedented masterpiece.  But it was also immediately recognized that its colossal size and weight prohibited its placement high on a roof.  In fact, it ended up taking forty men four days to move a special cart the short distance from the churchyard to it's new (and controversial) placement outside the Palazzo della Signoria (now Palazzo Vecchio), Florence's City Hall. 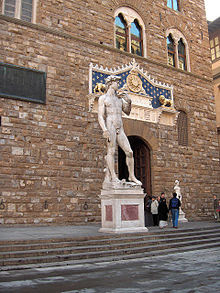 (Many contemporary renditions of the placement describe it as a sort of grass roots-inspired groundswell from the citizens of Florence who were madly in love with David.  In fact, the public did not see David until it had been placed, and then they did indeed fall madly in love with their new statue as the whole world has done over the centuries).

In 1873 for safe-keeping the original Renaissance masterpiece was moved again into the Accademia Gallery, Florence, where it is continually one of the most viewed and beloved art works in the history of all art.

But for 24 hours on November 12, 2010 a fiberglass replica of the David was installed on the roofline of Florence Cathedral. So, for one day only, the installation revealed the statue the way the Operai who commissioned the work originally expected it to be seen.

And isn't it wonderful for all who have had the exquisitely moving opportunity to encounter the David up close from ground level that that didn't happen?

*Cararra marble also contains many microscopic holes that cause it to deteriorate faster than other marbles and there are major concerns today about preserving the David.