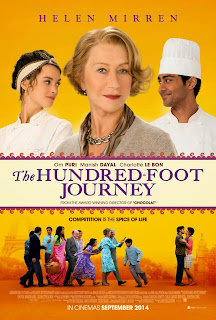 Joe Paluka/Ciwt bounced back from yesterday's birthday and into the theaters for 100 Foot Journey. Selected by friends, Ciwt went along.  Hearing Oprah, Steven Spielberg, Walt Disney, India, food, Ciwt might not have gone on her own and was expecting goo. (Probably others will be put off for the same reasons). But, for what it was - light, good-hearted entertainment - Ciwt found it more off-beat, slightly unpredictable, and touching than she expected. You kind of knew where it was going, but it got there a little differently.  Same with the dialogue: You had some inkling what was going to be said but were caught off-guard by what was actually said.