Unknown Greek Sculptor, Boxer at Rest (aka Terme Boxer or Boxer of the Quirinal), @330 BC (Hellenistic Era), Bronze with copper

Ciwt imagines lives of archaeologists are not filled with constant drama, so it is all the more touching to read the notes of a man in this field who was present on the slopes of the Quirinal when this completely unexpected huge masterpiece was unearthed: I have witnessed, in my long career in the active field of archaeology, many discoveries; I have experienced surprise after surprise; I have sometimes and most unexpectedly met with real masterpieces; but I have never felt such an extraordinary impression as the one created by the sight of this magnificent specimen of a semi-barbaric athlete, coming slowly out of the ground, as if awakening from a long repose after his gallant fights.    Rodolfo Lanciani, 1885


The sculpture, which is thought to have been part of the remains of the Baths of Constantine had clearly been carefully and lovingly buried some time in antiquity. And even for a Hellenistic sculpture, it was particularly moving and breathtaking.  First, that it had survived at all, comprised as it is with copious amounts of bronze - which was valued for its usefulness in coinage, weapontry and jewelry.  But even more for its humanistic expressiveness.


Some time during the Hellenistic Era, the subjects matter of sculpture was no longer limited to imagined and idealized gods and goddesses. But few that have been found have the expressive detail of the Boxer with his athletically muscled body, scarred face, cauliflower ear, and collapsed upper mouth suggesting broken teeth.  The sculptor's care and authentisity  went even further in this case: he used copper (reddish metal) around the open wounds on his face and body, and each seam is totally invisible making the Boxer's flesh smooth and oiled looking and each gash even more pronounced.  The moment you encounter him - or even his picture Ciwt would submit - you know his utter exhaustion, his struggle with the will to go on, his pain, and he touches you at a deep, deep level.  And, in the Getty Center's momentous show of Hellenistic bronzes, the Boxer touched Ciwt most of all.* 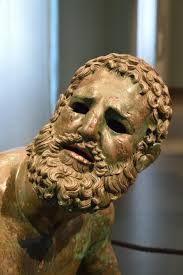