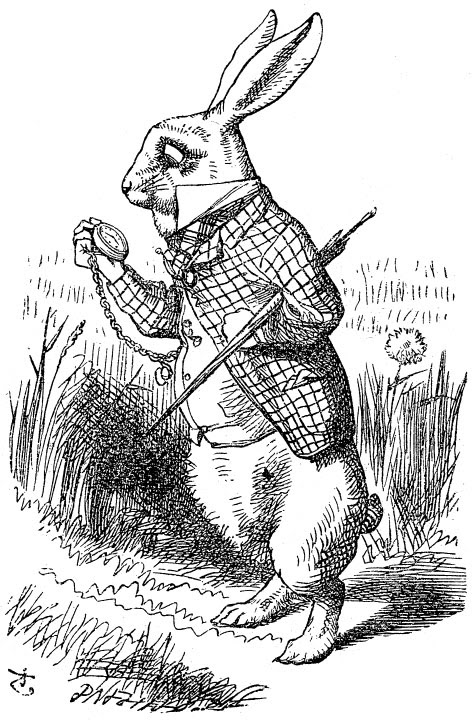 "I'm late! I'm late!  For a very important date...,"  said the White Rabbit.  Actually Ciwt has never entirely 'gotten' Alice in Wonderland, and probably would not have paid any attention to the book were it not for the illustrations.  Strange, grotesque many of them.  But memorable, fitting to the text and done by Sir John Tenniel (British 1820-1914).

Tenniel was a prominent (but socially reclusive) English illustrator, graphic humourist and political cartoonist who is best known for being  Punch magazine's political cartoonist and illustrating Lewis Carroll's Alice's Adventures in Wonderland and Through the Looking-Glass.  He was knighted by Queen Victoria for his artistic achievements in 1893.

Contracting with Tenniel was a hard-won achievement by Carroll, one which he may have regretted when the book first came out - in the United States, not England.  Why the U.S.?  Because Tenniel, who was absolutely exacting in his eye, found the first book inferior in its printing standards. When his objections were cleared, a second printing was released in England in 1865 and became an instant best seller.

So, like the White Rabbit, Alice was late, and all of this is on Ciwt's mind because she ended up with numerous events today is feeling quite late herself.  So now, off to hear Marcia Coyle interview Justice Stephen Breyer......