The couch in Ciwt's back room measures 7 feet across.  That is 3" shorter than the average wing span of female Eurasian golden eagles, with individual birds often measuring many inches more.

For some reason Ciwt couldn't stop thinking of Ashol-Pan, the Mongolian eagle hunter from yesterday's CIWT and movie. Her golden eagle is female, and, from the looks of it, the petite young huntress couldn't be over 4' 10" feet tall. 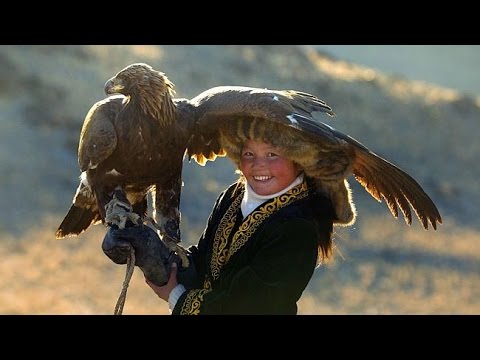 When diving for prey, the golden eagle reaches spectacular speeds of 150 to 200 mph placing it, along with the peregrine, among the two fastest animals on earth.  Its massive, sharp talons can easily snatch up hares and rabbits and take down wolves and larger prey.

Now, in order to compete for for a trophy in eagle hunting competitions, the bird is placed at a great and high distance while its rider is below on horseback carrying a large slab of fresh carrion in its right hand.  At the start signal, the rider brings its horse to a full, lunging gallop while extending its right arm out where the eagle can spy the carrion.

Now the eagle is released and makes a full body, headlong dive at the carrion, landing with talons fully extended on the rider's outstretched arm and seizing the meat in its powerful beak.

(Ciwt gets anxious sticking out her finger toward a caged parakeet).

Imagine being Ashol-Pan.  Maybe 90 pounds, at full gallop in sub-freezing weather, arm straight out, with a huge predatory, scavaging bird traveling over 150 miles an hour straight at her, talons extended. Ashol-Pan's bird made her half mile stoop (dive) and landing in 5! seconds.

Imagine the courage, trust, horsemanship, falconry skill.  Even watching the movie, seeing the events, Ciwt couldn't actually process the full extent of the feats - human and bird.  Ashol-Pan smiled the whole time, which is also probably part of the art.  As they say, true masters make it look easy.