Walk: Unpacking and Marin Driving Day
Distance: 6 blocks or so

With all humility and just back a matter of hours, Ciwt takes on the task of commenting on her trip to Paris. Sneak preview: That Paris, the world's most desirable tourist destination, is wonderful is a given.  These will be a few of Ciwt's personal thoughts - in bite-size installments, which is right in line with all the delicacies lining every street.

Taking in the unending beauty and charm of the buildings, parks and even the Seine River wending its way beside cobblestone quais and under ancient bridges, Ciwt found herself having to remind herself that Paris is Not a theme park.  Paris is 2000 years old.  Nearly all of that human history is gut wrenching.  And at least 600 years of its architectural history is physically gorgeous in a beautifully conceived (essentially mandated), delicate, gilted, awesomely beguiling way.  Even for a history major with many years of accumulated (art) knowledge this combination is very difficult to assimilate.

She also had to keep adjusting her relationship with walking. As her readers know, she is a lifelong walker, enjoying it for its restorative and athletic components as well as for the intimacy with surroundings it offers.  But she realized in Paris that a certain speed is of the essence of that pleasure, and Paris does not offer that.  Ciwt walked a minimum of 5.5 cold daily miles - often to the point where her legs became weak - but those were miles down cobblestone streets and teeny sidewalks that accomodate no more than two people across. (If you see a couple coming toward you, you step out into the street and hope you won't get hit by a car or motorscooter. They almost never move for you). Then there is the well-known dog poop situation.

Also Ciwt is direction-challenged; it took her at least two days to realize that street names are somewhere on the sides of buildings and that most of the tiny streets are no more than a block long and quietly wind into another with an entirely different name.

(Test: Can you find the street sign here?) Signs aren't often clear which direction they are pointing

and if you google directions to a place that is maybe 8 blocks away as the crow flies, you can end up with at least a half page of (often useless) directions,

So, the long and short of it, is that for Ciwt Paris walking was a great way to get around but also could be an intense, anxious, worrisome experience as she tried to avoid being hit by cars or pedestrians, stumbling over cobblestones or getting lost. Concentration was the name of the game! Instead of feeling all relaxed after an invigorating full day of walking, Ciwt came home kind of pissed (to be brutally honest) which was hard to yoga through because her hotel rooms either had bad floors for her Yoga Paws or were too small.

Yes, you read that correctly, roomS.  Her first hotel had been selected by her travel agent and had all the amenities it promised - except Charm!!  (Of all things to be missing in Paris)! After the premiere location and quite nice lobby and paying her entire bill, she was shown through an Outdoor breezeway into an entirely different building with treadbare stained carpets, rusted metal door frames and a rickety elevator. It felt to Ciwt like she had inadvertently checked into her local Goodwill, and even the beautiful bouquet of orange parrot tulips she immediately went out and bought weren't enough to overcome the dinginess/depression factor: 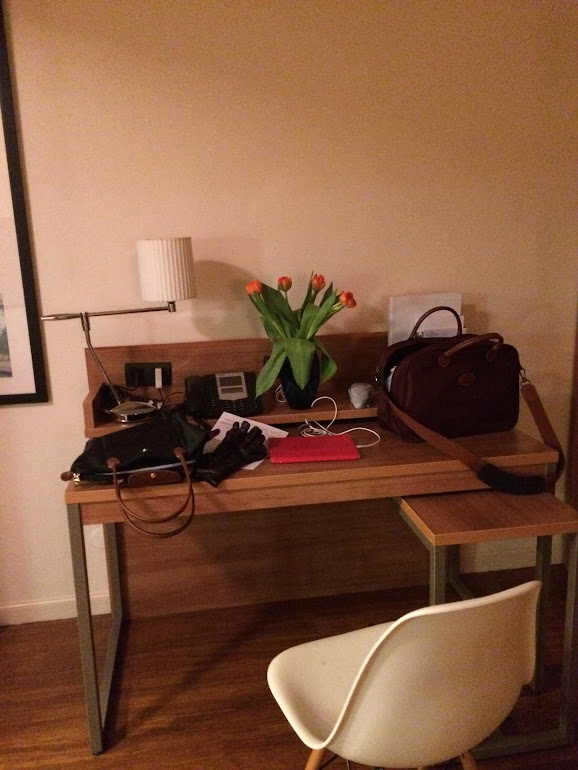 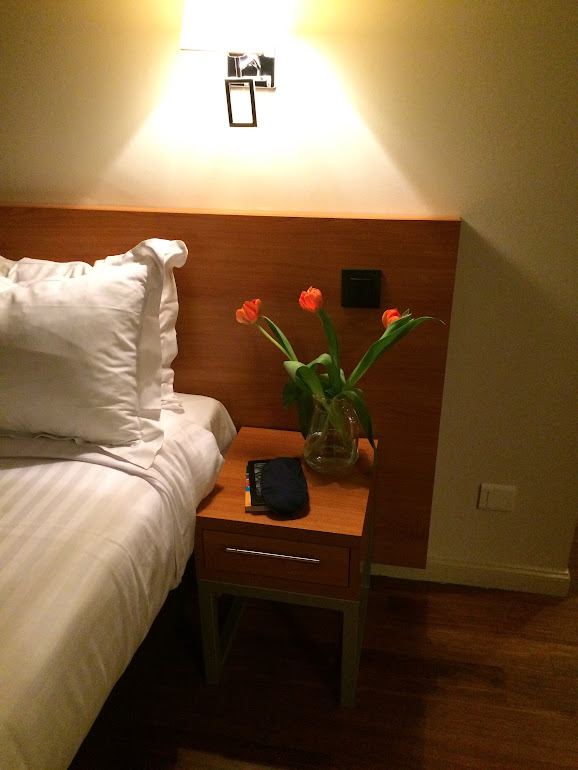 But luckily her downstairs neighbor in San Francisco had happened to mention a Paris hotel he enjoyed which was (after Ciwt figured it out) just a few blocks away and happened to have an available room.  So, after a few nights of dreariness, Ciwt became one of those people you see all over Paris rolling their suitcases down the street and moved (with the tulips) to an utterly charming hotel and room (also minute, like most Parisian rooms). 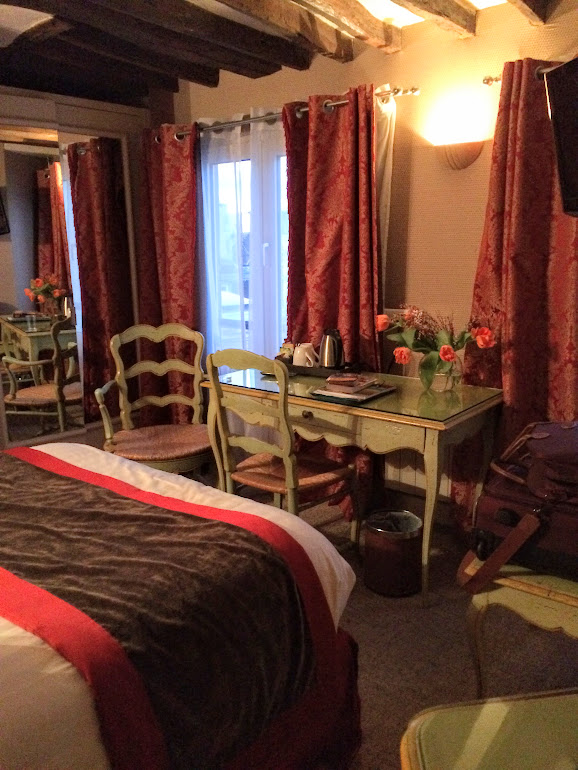 With that happy picture memory, Ciwt will end her first Paris CIWT.  Bonjour and Meow from Callie; good to have gone and be back.
Posted by Ciwt at 5:32 PM