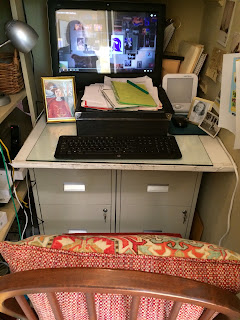 When Ciwt would think about her life after Callie, she had some notion of spending something like an extended time abroad.  Now that the time is here, she thinks of possible places - then goes to You Tube.  What a resource for armchair traveling - even though Ciwt's office chair doesn't actually have arms!

Today she took a several hour Matisse pilgramage to all the places he lived and painted in: Bohain, Paris, Collioure, Nice, Vence.  And to the place, amazingly, he said he would have chosen to live his life if he had known it before he was an old man: New York City.  He was astounded by and deeply attracted to the Big Apple's energy.