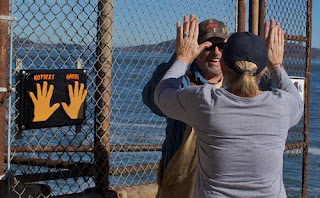 There's another part of the Hopper's Hands story which Ciwt just learned about (as well as has doubts about).  It concerns the sign's connection, however unintentional, with the Golden Gate Bridge jumpers. Apparently Hopper has been among the ironworkers called upon to try to rescue prospective jumpers. As of three years ago he estimated he talked or wrestled down 30 people and lost two.  So now, according to some local runners and various online accounts, many people associate the Hopper's Hands sign with the real man's hands, reaching out to deter someone who has come to the bridge to jump.

Ciwt thinks this is sort of an urban legend.  Hopper himself feels people just sort of tied the sign and suicides together and says: "..When I put those hands up and the paws up, that was the furthest thing from my mind.  The hands sign is lots of things to many people.  Except that some people have made it a good thing about reaching out and stopping those people or whatever."

Ciwt still thinks of the hands as the runners' turnaround place (which she sees now can be taken on several levels).