Has Ciwt told you recently how much she loves Alta Plaza her little, nearby park?  It is two square blocks and part of a sort of chain of city parks approximately the same size. The thing that distinguishes Ciwt's park from the rest of the chain is its awfulness.  It is, knock on wood, safe, but it is crumbled and seedy.  And this is why Ciwt loves it.

This wasn't always the case.  Other parks have been beautified or at least repaired, and a few years ago Ciwt joined her neighbors in a campaign to convince the city that our park should be as well.* Meetings were held, landscape architects were hired, politicians were recruited, neighbors argued, votes were cast.  And finally a plan was settled on; all that remained was for the city to do its part and provide the necessary and promised funds.  Well, much time has passed and the city has only begun its series of 'meetings' (read: stall patterns) about approving funds for each component of the project.

Optimism doesn't run high.  The one and only project the city did fund was deep in the drought when it closed half the park for over a year, tore up authentic old grass and replaced it with 'drought free' grass.  The park was reopened, and within months the new 'grass' revealed itself to be pure and virulent weeds 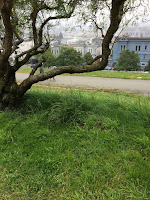 .  The city apologized, the drought free 'grass' is still there protected by some ordinance making it virtually impossible to replace.

Meanwhile - as Ciwt has looked at the improved parks with their fancy blue tennis courts, organized, colorful, and perfectly smooooth paths, their healthy manicured plantings and mown grass - she has become more and more fond of her park just the way it is.

The thing about her park she realizes is its realness.  The haphazard way it has weathered actually feels to her like country.  Real c

ountryside  just a black and half away.

What if those eternal city meetings really do come through with funds?  Perfect paths can't possibly have the same charm as her park's present ones 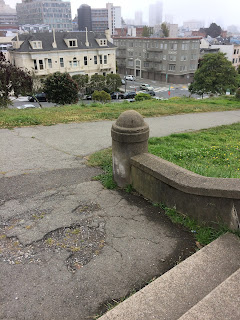 .  And what if the drought free weeds are gone and new trees grow straight instead of how the wind shapes them? 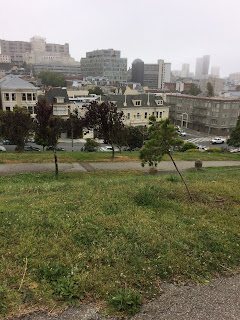 Or the natural old grass grew consistently green and was manicured by machines rather than people and dogs? 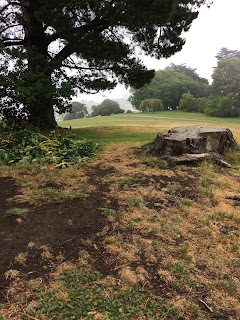 Or off-leash dogs weren't allowed at all like they aren't in other parks? 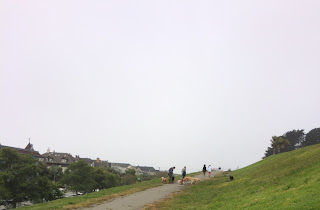 Or the drainage was actually absorbed instead of demanding tricky navigation on the sidewalks? 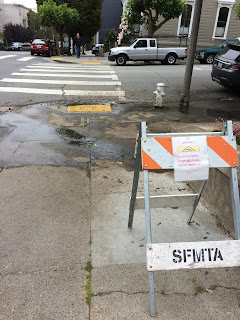 And Just Imagine if there were cute little indoor places in the park where San Francisco's natural (and adored by locals) weather could be ignored! 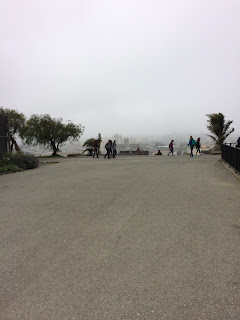 Ciwt now realizes if all those 'improvements' happened to her park, she would be crushed. 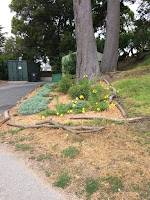 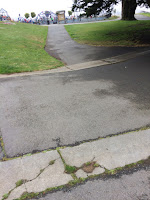 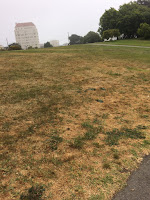 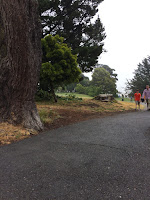 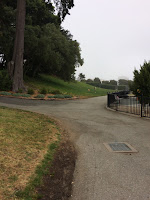 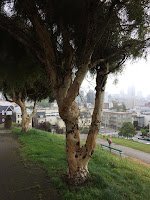