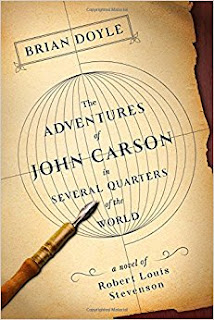 Just for openers here are a few of the writers who esteemed Robert Louis Stevenson and thought him one of the finest writers ever: Mark Twain, Jorge Luis Borges, Henry James, G.K. Chesterton.  At the top of the contemporary list of ardent Stevenson fans is Brian Doyle, an honored and prolific Portland, Oregon based writer.

Boyle took on the task of re-enfleshing Stevenson during his months living in a rooming house on Bush Street here in San Francisco waiting for Fanny, his passionately adored mother of two, to be free of her profiligate husband. From December 1879 until April 1880, nearly destitude and sickly, Stevenson roamed the streets of the young city breathing it in and, writing furiously and sending manuscripts back to his native Scotland in hopes of earning money to support the family he would instantly have when they married.

Capturing a literary genius is task enough, but Boyle raised the bar by setting out to do it in a voice emulating Stevenson's.  As someone - probably many - pointed out to Boyle, if you're going to do that, you better bring it. And, Boyle does.

She thinks. Ciwt actually never has read Stevenson, having relegated his A Child's Garden of Verses to tots, Treasure Island, Kidnapped to young boys, and Jekyll and Hyde to Frederic March (who won the Academy Award for the role).  Wrong on all counts: each of those books is considered a literary masterpiece. And if Boyle's voice is even close, she can understand why.

The storytelling is extraordinary.  Every small, everyday moment of life is risen to the level of immediacy that fills the reader with the delicate but deeply human and joyous adventure of being alive. And, wow, if you love San Francisco, your heart will be warmed and touched by Boyle's love letter to the city.