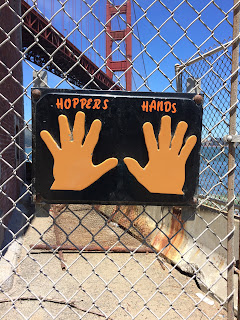 They are still there!  Along with the paw prints just off the ground under the hands!  Ciwt's route to her favorite Crissy Field walk has been much less accessible for years of  highway construction so she was apprehensive today when she reached land's end under the Golden Gate Bridge. What if Hopper's Hands weren't there any more.

For decades it has been runners' tradition to run out to the chain fence next to Fort Point, an old military post at the windy, forlorn place the Pacific Ocean and San Francisco Bay come together. Every runner would stop briefly and press both palms against the fence - and, if they were running (or walking) with their dog, they would lift the dog's paw and press one or both against the fence.  Then they'd turn around and head back toward the city and wherever their outing ended.  This happened quietly, unsung, day and night - a simple ritual among San Francisco runners that would often get the confused attention of tourists who had no idea what was going on.

Another confused on-looker was Ken Hopper, a bridge ironworker, one of a group of hardy souls who fix and maintain the bridge, often at dizzying heights. Day after day he'd watch runners and walkers touch the fence before turning around.  Wouldn't it be nice, he thought, if they had something more inspiring to touch than rusty chain-link of "No Tresspassing," "Men at Work" signs.  So in 2000 he had the bridge's sign painter create a small plastic sign with a pair of high-fives and affixed it to the fence.  About a week later he saw a woman making her dog touch the fence below, he had another sign made, this one with dog paws. 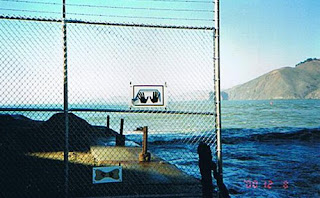 
Eventually Hopper's bridge co-workers insisted on adding the words "Hopper's Hands." They felt strongly people needed to know whose hands these were.  Finally Hopper just took it upon himself to paint it himself.  He also periodically replaces the signs after wear and tear take their toll, sometimes varying the colors to make tributes to the 49ers or the Giants.

Various Iterations since then


"I still get a kick out of it," Hopper says after all these years.  And so does Ciwt and an untold number of Bay Area walkers and runners who are in on the wonderful story of Hopper's Hands. 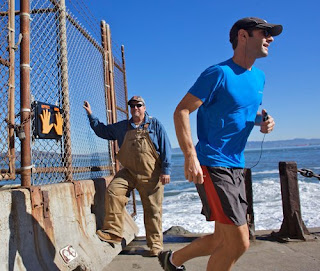