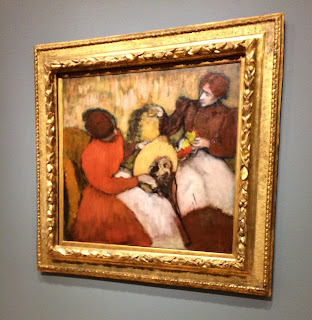 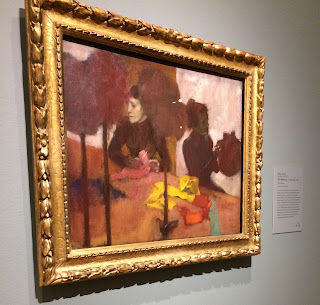 When Ciwt returned to the 'Hat Show'* at the Legion the other day, she was interested in the way Degas portrayed the unromantic actualities of work in the Paris millinery trade at the turn of the 19th century.  In the 1882 painting he gave one of the young workers a colorless, exhausted pallor. Presumably the second milliner girl is no more vibrant.  And in the 1898 work, Degas' last millinery painting of the many he executed over the years, one subject has disappeared as a person into her work and the woman in the foreground is joylessly fatigued.  The contrast between the milliners and the vibrantly colored, festive ribbons and plumes that will adorn the hat creations says it all. In late 19th century the demand for hats was so high, milliners would often work 12 hours a day and 15 to 20 during the peak season.

Degas's depictions - in their truthfulness - honor these women for their industriousness in the actual unglamorous work world that went into the far-removed and glamorous showrooms.