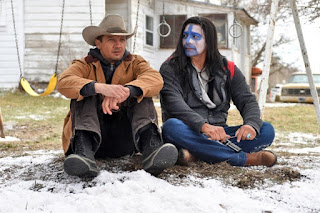 Jermey Renner and (the terrific) Gil Birmingham in Wind River

If you are into modern Westerns, Taylor Sheridan's Hell or High Water set the bar exceptionally high. Wind River doesn't attain that level of script writing, directing or acting.  But if, like Ciwt, you are a fan of Taylor Sheridan movies (Sicario, Hell or High Water), you will probably, as she did, like-not love Wind River.  It's the third in his screen writing trilogy, his directorial debut and very good.

PS - No reviewer mentioned it, but Ciwt found it strange/off-putting that no matter what action Elizabeth Olsen's character was involved in - including blizzards, witnessing gruesome scenes, nearly being exploded - her eye make up was always thick and perfect and her face never broke into a single wrinkle.  Guess it was in her contract - Or Ciwt is a wee jealous.