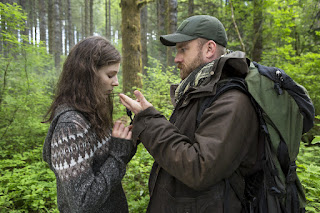 Debra Granik, the movie's screenplay adapter/director, who also did both for the very special Winter's Bone eight years ago, is one of Ciwt's heroes. Her non-manipulative, non-hype way of talking about Leave No Trace captures some of the movie and likely some of Granik:


"People that need a high kill ratio don't have to come. It's OK because we didn't borrow so much money to make this," Granik said. "If they want to see an American who's working hard to keep his nobility intact and his daughter who's really trying to understand him and figure out her life trajectory, then they can come and rap with us. Some people have to remain at the margin so that some of the offerings are about the margin."

*And as long as she is borrowing straight talk, her headline is a small phrase she admires from The Wall Street Journal's movie reviewer, Joe Morgenstern.
Posted by Ciwt at 5:30 PM