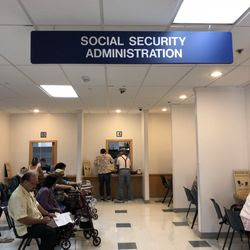 Ciwt has authority issues that go way back.  So when she learned she needed to go to the DMV in person to renew her license this birthday she went into a small tizzy.  Then when she learned the license was to be the new government mandated Real ID that required her to present her social security card and other intense identification, her tizzy enlarged.  Finally, when she realized she did not have her social security card, well....

Turns out to get a replacement card you have to show up at a Social Security office in person and one of the pieces of proof that you ever had a card at all is a pay stub. Naturally since Ciwt works for herself, she doesn't have one of these.  No pay stub means no social security card which means no Real ID license and therefore - in 2020 - no id other than a passport for getting on an airplane.  She almost threw in the towel and hid under the bed with one of her cats.

But she soldiered on - sure she was somehow going to end up in jail with all these bureaucratic authority obstacles ahead of her.  She grabbed her passport, current license, ancient pay stubs, Tax returns and took the 3 Jackson bus down to the social security office.  Since she couldn't make an appointment she also grabbed bundles of reading materials - including the Driver's Manual for her upcoming written test - since she was in for a long, possibly all day wait.

She didn't get arrested.  This is what happened: The bus was right on schedule and dropped her a few blocks from her destination. When she walked into the Social Security building it was clean as a whistle and visibly organized,. Helpful people ushered her to the computer where she punched in her social security number and got her waiting number, 865 - oh dear.  Then she walked over to the ladies room but it was occupied.  This was lucky because she heard "Number 865, Window C", her number ! already?! called.  So she hoisted her 'I really am me' stuff over to window C.  The social security agent  smiled and said "Hello, Ciwt.  How are you today?"  He asked for a single ID and the form she'd filled out, looked at them briefly and said, "Just a moment, I'll get you a receipt."

That was it!  Ciwt actually asked him "Don't you need to see my passport or anything else?"  He smiled, "No, you're good.  Just keep this receipt in case you don't get your new card in two weeks."  Her total time in the Social Security office was no more than ten minutes; things went so fast she forgot to take a picture for CIWT.  Everything had been clean, pleasant, efficient and completely unexpected.

Kind of shocking to Ciwt's sensibilities actually.  After a lifetime of essentially writing off authority, the authorities had showed themselves to be utterly reasonable, pleasant, professional.  Hard to explain, but it kind of blew Ciwt's mind.  In a good way.  Hopefully this old dog can assimilate this new working-with authorities-without-being-in-a-secret-tizzy trick.  After all, ahead lies her new license, her new Real ID and a traffic 'thing' she's considering contesting.