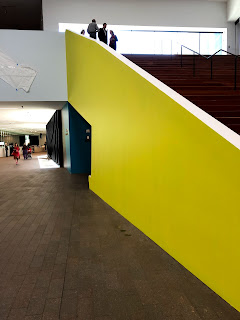 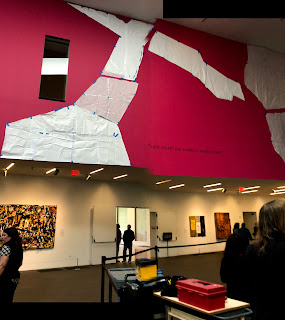 So the other day Ciwt caught the de Young crew in the midst of  installing A Bright Stage by Indian artist Ranu Mukherjee. When the installation is complete it will metaphorically transform the Wilsey Atrium into a grove of banyan trees which are sacred to people of diverse faiths as a symbol of fertility, life and resurrection. Canopies of mature banyans often reach such significant scales they come to define outdoor meeting places of many Indian communities. A frequent site of public executions during the British Rule of India from 1858 to 1947, the banyan tree also came to be a symbol of India's fight against colonial power and was declared the country's national tree upon its declaration of indepence in 1947.

Even as paper cutouts in the early stages of installation Ciwt felt the banyans brought a new sense of warmth and community to the cavernous de Young atrium. And to Ciwt's mind, that space has never looked better.