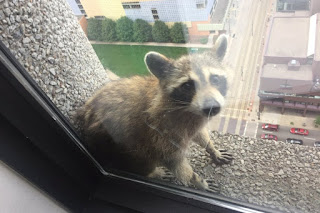 When an earthquake starts shaking, you freeze.  Time stretches and a moment is impossible to track. When, mercifully, the shaking stops, you realize the eternal trembling may have lasted a minute at the most.

This was how it felt to Ciwt when she encountered a raccoon in her kitchen some years ago.  Ciwt's kitchen is one of those "galley" ones, so when she stepped into it she was already eyeball to eyeball with the intruder.  Except the "intruder" had found stashes of dry pasta and cat kibbles for her four babies crouching behind her, so it was clear she considered Ciwt the intruder.

It was clear because she was standing on her hind legs undulating in circular movements that looked like those videos of cobras and rattlers on the verge of striking. It was also clear because this mama raccoon was hissing and making loud, eerily pitched squealing sounds. Her eyes were prehistoric,  ferocious and locked on Ciwt's.

There we stood for that earthquake eternity.  The raccoon was either going to go for Ciwt's throat or not; there was no way of telling. Instinctively we both kept intensely beaded on each other.

The raccoon broke first.  She batted at her babies, and they ran out of the galley, across the den carpet and out the back door.  When they were safely out, mama followed.  Then she led her family straight down the three story wall from Ciwt's place to the ground.  For several days after she expressed her rage by climbing up the wall again and leaving large, territorial dumps.

This CIWT story because a news story about a "cute" raccoon that scaled the wall of a skyscraper in St. Paul has been viral lately.  The city held its breath while some rescue people figured out a go-around for the sealed windows.  The little creature was saved. Everyone in the Twin Cities and beyond is still awwwing and dabbing little tears from their eyes.

Not Ciwt!  Raccoons are closely related to bears. Some bears - like the red panda - actually are raccoons. They are vicious, they will kill.

People don't want to hear this about raccoons. The members of both bear and raccoon families are pretty cute or at least fetching to look at in pictures and at a distance.  Not people like Ciwt who have been eyeball to eyeball with them and preventing their babies from getting at food.*


*In the Mama's defense, she will say the raccoon was smarter about time that day than Ciwt. This all happened the first day of daylight saving and Ciwt had left her back door open forgetting it would be pitch black when she got home.  From somewhere under the building or in the bushes the mama had sniffed out this easy food source in a nanosecond.  As the Unhelpful! animal control person told Ciwt, "They've been here longer than we have."