Walk: Not really
Distance: A few blocks, a little yoga

So, a month or so ago Ciwt followed an off ramp and came directly to this: 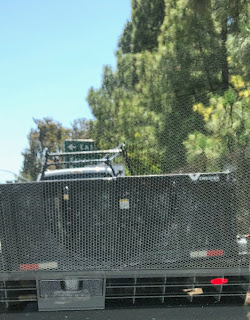 A huge, black dumptruck as wide as the road.  Since that is all she could see, she followed her leader until she heard thudding on her passenger window.  She looked over and saw...the highway patrol (CHP)!?

Turns out Ciwt's truck was actually on the shoulder.  Who knew?  The CHP of course, and they gave the truck, Ciwt and two others behind her traffic tickets for "Passing on the Shoulder."  $248 tickets that somehow took a half hour to write.  As Ciwt sat there waiting, ten or twelve other cars were pulled over for the same PotS 'violation,' but were waived away by the other CHP guy.  Obviously there was some visibility problem or the off-ramp was feeding directly onto the shoulder.  When Ciwt asked why she'd been stopped while others had been allowed to go on, her CHP guy said "We don't have enough room on the side of the road right now.  When you leave, believe me, we will be sure everyone gets a ticket."

So, poor Ciwt.  A traffic trap.  She hadn't seen one of those since those small towns in Nevada when she used to drive to Sun Valley.  Oh well, guess even the richest counties need more income these days.

At first Ciwt felt so gypped she planned to go to court to protest.  But, you know how that would probably go. Plus they do make it easy to handle these things right from your computer these days which is what Ciwt did when the ticket actually arrived.  She's paid on line for it and for the traffic school which will take the ticket off her record if she passes the necessary test in the alloted time.  So, now she is studying her lessons on line and hopefully will pass the on line exam with the flying colors.

Darn, and Ciwt's sympathies to the driver of the black truck who probably didn't have a half hour in his work day or @$300 to spare.
Posted by Ciwt at 5:36 PM