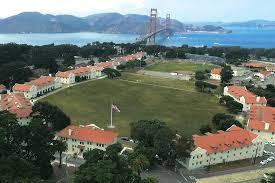 The request for proposals to develop Fort Winfield Scott*, the 30 acre, mostly vacant, 22-building mostly early 1900's property went out from the Presidio Trust in January.  The Trust sought "mission-driven organizations" willing to work in the "unusual confines of a national park and a campus of historic buildings."  Oh, the initial infrastructure outlay they said would be at least $200 million and climbing.  And did Ciwt mention the Trust also wants a new 'transit facility' (meaning new roads and transit hubs) as part of the project as well as 'environmental sustainability upgrades'?  And finally there's this little stipulation, it 'prefers' that the developers self-finance rather than raising money through philanthropy.

Finding such a tenent probably seemed a bit of a pipe dream even to the Trust - or at least a long term waiting game until the organization showed up.  Or maybe Ciwt is just imposing her thinking on the Trust. In any event, at the recent and very first deadline for submissions, there are NINE teams competing for the 'redevelopment' (to say the least!), seven of which are non-profits.

Public hearings begin at the end of this month.  Oh boy...But still, Ciwt finds this a hopeful way to go into Fourth of July, 2018.