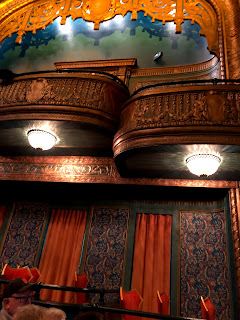 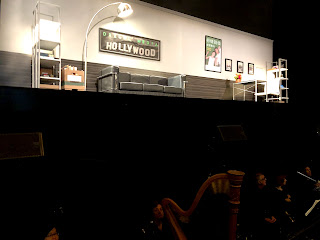 Politics; you can't get away from them these days.  Ciwt didn't read about it in advance so she wasn't aware that David Henry Hwang's new play Soft Power is intensely political and personal.  It traces the full trajectory and present day scope of  his emotional reaction to the 2016 election.  Most of his views are exactly what you hear all the time - if you live in San Francisco.  But many of them Ciwt had never heard before.

These concern what it is like being Chinese American, which Hwang, who wrote the Tony award winning M. Butterfly, is.  What he had to say stretched Ciwt's world, and according to the Chinese woman she sat next to, totally resonated with the the Chinese audience members.  That would be about 85% of the today's audience.  According to Ciwt's seatmate again, Chinese people don't go to the theater for the most part because it tends to be predominately white in story and audience.

It was not a comfortable stretch but it was so original and artfully done Ciwt stayed with Hwang in spite of herself.  For one thing he put many of his thoughts to music, and for another, this music was chock full of the very best show stopping, high kicking, soul belting, love song musical theater.  The kind of music that people who go to musicals can't resist.

Soft Power worked for Ciwt.  She liked it a lot plus it made her think, and her seatmate felt the same, perhaps for slightly different reasons.  But behind her on the way out one man was telling his wife he thought it was 'overly ambitious,' 'too creative and original.'  But to Ciwt, those are characteristics of America she likes even though they can be unsettling so, okay, have them in the play.

Apparently this intensely personal, intensely political, intensely outspoken, over the top play is on its way to New York.  That should be interesting...
Posted by Ciwt at 7:37 PM