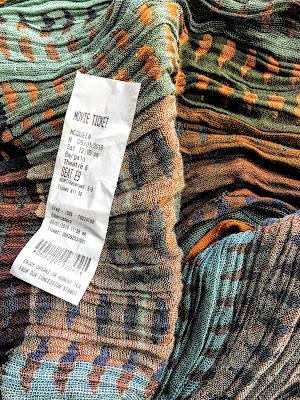 Here's Ciwt's movie ticket to McQueen on top of one of her scarves. After seeing the footage of  Alexander (Lee) McQueen in spontaneous action she is convinced that he could take a look at these two objects, pin them to a mannequin and create a garment that would shock Ciwt's sensibilities and stun her with its raw beauty. He did things like that again and again.  If he didn't have any money (which he didn't for years), no matter; he grabbed the things and people around him with the same creative genius he applied to his garments and, essentially from air, produced fashion like no one had ever seen.  Fashion so compelling it took the haughty and resistant haute couture world by storm.

She watched McQueen in action on film for nearly two hours, saw and heard the the movie's presentation of his life and too short career and still has no true understanding of McQueen or his genius.  That's the thing about genius; you can film it in action, write, paint or dance about it, but, no matter what net you choose, you can't capture that elusive, unique spark. There's a certain sadness in this for Ciwt. Sadness that true understanding of the genius is not to be had, but more that the person propelled by genius likely doesn't understand it either.  It appears to be deep and insistent within them but not reliably of them.