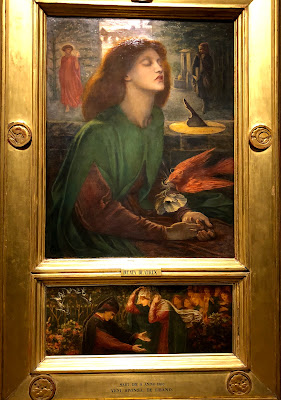 So, if there is one thing Ciwt doesn't resonate with, it's details.  And that's why she's been so bogged down preparing for her tour of the Pre-Raphaelite Brotherhood artists.  Just the name of the group drives her a bit up the wall because they actually venerated the very Raphael the name suggests they rejected as well as many artists who followed him or were Post-Raphael.

(Are you still with Ciwt?  She totally understands if you've dropped away).

The PRB, on the other hand, was obsessed with details.  Take the painting above.  Here are a few details: 1. The artist's first name wasn't actually Dante, but he preferred it to his given name because he revered the poet Dante.  2. The painting is based on Dante's unrequited love of Beatrice, a woman he also turned into one of the main characters of  many of his works from the middle ages, including  The Divine Comedy,  The Inferno, Vita Nuova, and a book of poems based on his love for her.  3. She died and Dante wrote that they would be reuinted in heaven.  4. Well, actually this a painting of Rosetti's 'love' Lizzie at the moment of her passing (probably by suicide).  5. He treated her abominably even though he suggests they were madly in love and will meet in heaven.. 6. This is just the beginning of the convolutions involved in the painting not to mention all the technical details about how it is painted.

Has Ciwt ever read Dante? No.  Does she know the story of Beatrice? No. Does she know the names of Rosetti's miriad girlfriends besides Lizzie, most of whom have their portraits by him in the show? No again.  His paintings - and those of the whole, damn PRB, are based on Arthurian legends, Biblical stories, Tennyson poems, Shakespeare plays and a multitude of red-headed models Ciwt knows and cares nothing about.

The key detail Ciwt does care about and can easily retain is that her tour will be over day after tomorrow by noon.