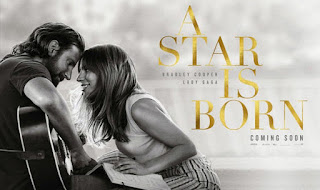 You'll all see it, Ciwt thinks, and you'll enjoy the new A Star is Born. Two hard-working. likable, watchable stars move their already immense talents into yet other fields. It's almost too much to ask that they have chemistry together, but they do.

You could say it is Lady Gaga's movie.  It is her acting debut; she is excellent at that new thing and of course outstanding at belting out song after song often dancing or accompanying herself on the piano.  Oh, and she wrote most of those songs.

But, Ciwt has to give A Star is Born to Bradley Cooper.  As always it is worth going to the theater just to see those blue eyes, his sexy/charming ways and hear that slightly gravelly speaking voice. And it was great to see them here in gently intimate cinematography. There has been well-deserved excited press about Cooper's directorial debut. But who knew he could sing and play the guitar?  Well, he can quite well.  And write songs?  Turns out he does that. He also co-wrote the script for this newest and more up to date version of A Star is Born, produced it and starred.

Many critics give the movie an A or 4/4 rating; personally, Ciwt would rate it B+. The songs seemed pitched to a young audience and the sound was mixed in a way that kept reminding her 'you're watching a movie.' Since this is the fourth version of A Star is Born, the story arc was necessarily predictable, but Ciwt wished it had been better balanced, deeper, more complex, less country western maudlin in the telling with many fewer 'f' words.  Finally, let's face it, any movie that is about the decline and demise of the handsome,charming, blue-eyed Cooper is just not going to win its way entirely into Ciwt's heart. No Lady GaGa song is going to take away that loss.
Posted by Ciwt at 6:52 PM