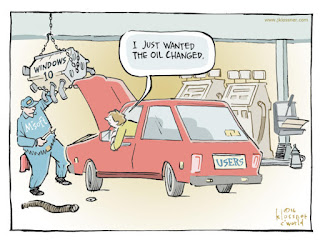 Ciwt had to take her newish car into a warranty dealer today.  Here were the problems she was encountering: tripmeter randomly reset itself back to zero, back up screen randomly refused to turn on, car wouldn't let her shift gears at random times, and a few more.  Not one about ye olde mechanical problems.

Her tech specialist was polite but clearly thought Ciwt was a crazyish lady of a certain age since nobody at the dealership had ever heard of such issues.

Well, .. at the end of the day he called to report that All of Ciwt's car issues were in fact known to the manufacturer, and fixes had been created by their technicians.  Her specialist now had a tone of respect in his voice and said he would like to keep her car longer 'to really make sure.'  Ie, maybe his client was a more reliable source of information than his manual.