Walk: To and from car
Distance: A few blocks, Large bucket of balls, Yoga

Ciwt finds herself trying to encapsulate her New York trip - which means in some way trying to describe New York City itself.  She gets on her case about not coming up with anything adequate, but then she remembers many authors for centuries - from O. Henry, to Henry James, to Edith Wharton to F. Scott Fitzgerald  right up Amor Towle, Jennifer Egan and all the New Yorker 'Talk of the Town' writers for a very few present ones.  They all write about New York - but in bits and pieces.

Realistically that is all that can be done; no matter what your talent, you can't capture it all.  Some online site asked people to come up with 10 words to describe New York. The responses are numerous, 10 adjectives each without a single duplication.  Here are a few of Ciwt's favorites from the lists:

- We think nothing of going for ice cream after midnight in the winter.
-Noisy, filthy*, expensive, exciting. Easily the best city on earth.  *(Ciwt - Not any more.  SF is worse now)
-It’s a city of dichotomies, exhausting and exhilarating, humbling and inspiring. It’s one of the hardest cities you’ll ever live in but if you survive you’ll never be able to live anywhere else.
-Rats, Cockroaches, Rude, Hectic, Artsy, Renovation, Walk, Picnic, Subway, And my favorite City.

-Diverse, Cultural, Sophisticated, Energetic, Magical, Gritty, Hard, Fast, Walkable, HOME.
-Rich, Poor, Cutting edge, Stuck in the past, The Best.
Actually there are duplicatons - in spirit.  Everyone cites contradictions galore but to a person say in in their different words New York is purely, simply and uniquely The Big Apple 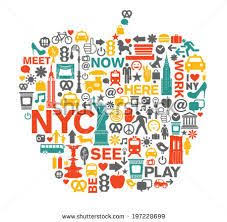