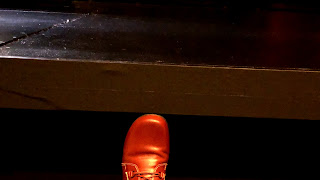 See Ciwt's rain boot nearly touching the stage at the Strand Theater where she sat Front Row Center (to say the least) for Her Portmanteau.  If you think that looks close, they actually rolled the stage forward so the performance was at Ciwt's eye level just a foot or so away.  Even with such visibility she had to ask the woman sitting next to her exactly what happened at the end of the play.  Maybe Ciwt was preoccupied with her neck which had become sore from swiveling right and left to follow the actors.
Posted by Ciwt at 6:07 PM