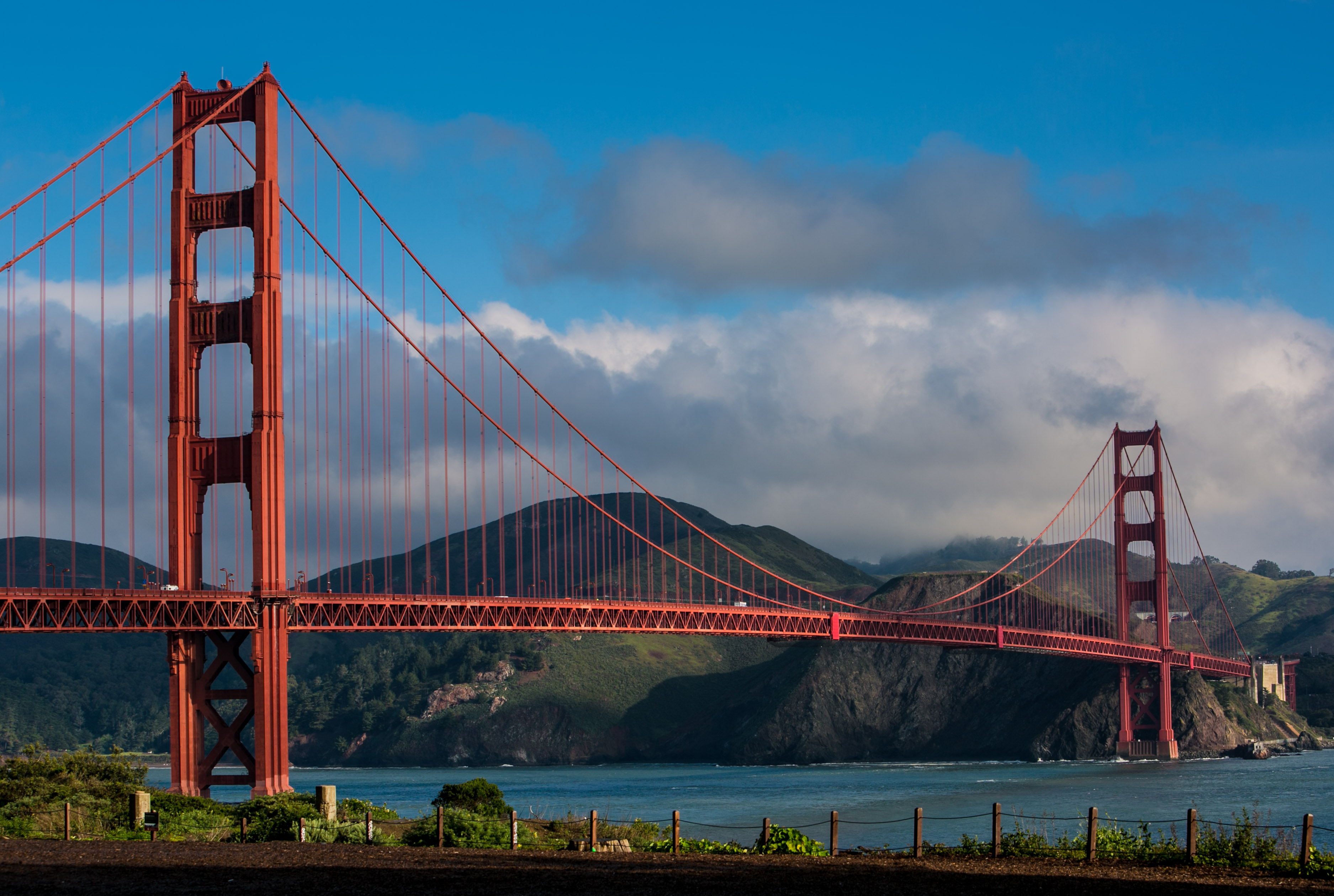 It almost didn't get built at all, the man who is credited as its designer actually wasn't, the color for which it is known was completely unplanned, the 75th anniversary of it almost marked its end. And, that, dear readers, is a short history of the world famous Golden Gate Bridge.

Why was it almost not built?  Well, because contentious politics are nothing new.  Even with a provisional contract to build a bridge from the U.S. War Department (which owned the land on either side), it took four more years of fighting before those in favor of the new bridge prevailed.  The reasons against the bridege were fierce and diverse: lumberpeople feared newcomers woud agitate against the felling of redwoods, cattlepeople worried tourists would disturb their land and animals, many counties feared the costs involved in both building and gearing up for tourists.

With the full construction permit finally in hand in 1930, it still took three more years before construction began.  Joseph Strauss,who had submitted the original design for the bridge and whose tireless cheerleading was largely responsible for its laborious trek through myriad political barriers, was named Chief Engineer.  But much of those three years was spent by Strauss's Vice Preesident, Charles Ellis, working and reworking the architectual numbers that would allow the structure to actually stand. Only recently has it come to light that the bridge Strauss designed, besides being clunky and ugly, would have collapsed in less than three months - or sooner if there had been a mighty gale.  This was the 'problem' Ellis was addressing.  Along the way he also came up with the graceful art nouveau look of the bridge.  Nonetheless, when the bridge was open to great ceremony in 1937, Strauss's name was on the plaque and Ellis had been fired by Strauss the year before.

The story about the gold (?) color of the bridge is anecdotal but also true.  It is known as International Orange and often used as a base/primer - which it was how it was employed on the way to completing the bridge.  When San Francisco residents saw the new color,  they were thrilled and amused.  How clever that the engineers of the bridge that spans the Golden Gate Strait should paint the bridge gold! The rest is history.  Who knows what was done with the thousands of cans of  industrial gray paint that were in the original plans.

And speaking of plans, well someone sort of forgot those when the Golden Gate Bridge celebrated its 50th anniversay in 1987.  Somehow the 'planners' thought a comparative smattering of people - maybe 80,000 at most  - would show up for the occasion.  800,000 came, some from the San Francisco side and some from Marin.  And the people on both sides were allowed to begin crossing at the same time.  Who knows how long it took for 'the planners' to realize they would meet toward the middle of the bridge and that no one (including Charles Ellis) had ever calculated how long the bridge could withstand the vibrations from footfalls and other motion of  300,000+ people, dogs, baby strollers, bikes, roller skates, skateboards that got on the bridge.  It is one of the great miracles of modern life that, when they realized what was happening, the people on the bridge did not panic.  Some got seasick and many sick with anxiety but they didn't panic.  They began to hurl bicycles and strollers over the railing into the Bay to lighten the load and cautiously, quietly sometimes jlkingly, reversed their courses.  There were just a few minor injuries, no deaths and a landmark, historical catastrophe was averted.  (A photo with note from someone was as there follows:) 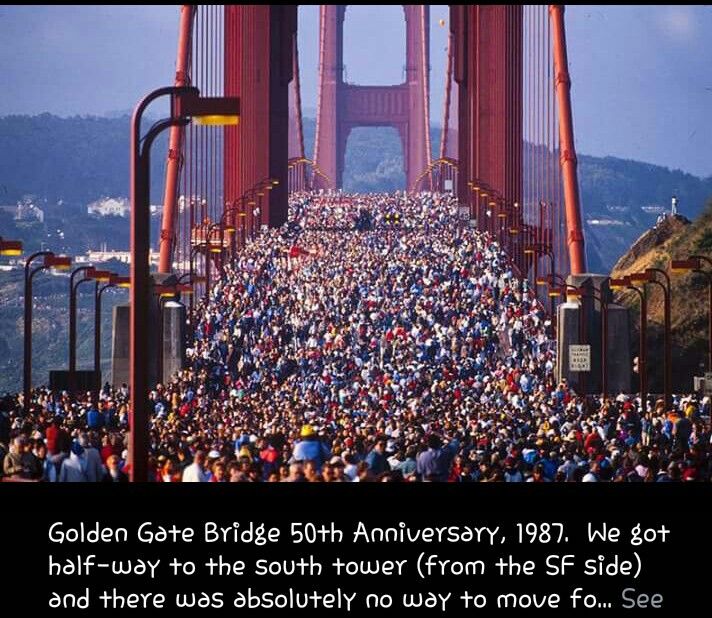