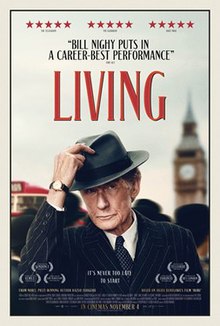 Being a woman well beyond a 'certain age,' Ciwt understandably did not have a movie about a man also well beyond that age and dying on her list.  That is until her long time movie friend told Ciwt she would love Living.  This is a recommendation Ciwt could not overlook so today she walked to one of the few and excellent theaters remaining here after the pandemic.
As is her habit she bought her ticket ahead - more expensive, but it becomes an appointment of sorts and ensures that she will get there.  Certainly for the last few years this has been a particularly unnecessary expense since she's often one of only three or four (or less) in the theater.  But not today!  The seats were all sold out and people were being turned away when she arrived..
The disappointed ones Ciwt saw walking from the theater were all within 5 years of Ciwt's age, and when she got into the actual screening room, so was everyone else, to a man or woman.  Maybe they also had friends who recommended Living or maybe they were wise enough to go simply because Bill Nighy was in it.
If so, they were the smart ones and everyone else is thanking their friends and passing on the word.  This was the performance of a lifetime for Mr. Nighy - which is the highest possible praise because Bill Nighy is always superb in any movie he is in, in any role.  As at least one critic says of him, he is "an international treasure."
So Ciwt passes on what her friend told her:  Go, you will love it.  Whatever your age if you appreciate truly great acting.
And now a bonus NYT article about Mr. Nighy
Posted by Ciwt at 5:45 PM