So yesterday I was saying Portland is a young town (with not many job jobs).  Here's a case in point about how this possibly plays out.

Portland is home to a Huge, Amazing, Legendary bookstore, Powell's, and like everyone local or visiting I made my pilgrimage to it.  When I was looking through the acres of shelves there was an announcement over a loudspeaker about Richard Hell giving a talk and book signing for his new book I Dreamed I Was A Very Clean Tramp.

Richard Hell is a 'founder' of the Punk Rock movement of the 1970's (think Sid Vicious, Patti Smith..). If I'd heard that announcement even a week earlier, it (along with Sid Vicious, Patti Smith..) would have meant virtually nothing at all to me.  But, as luck would have it, a friend had just sent me a review of Hell's book by her friend Dean Wareham.  So, curious to see him and figuring he'd appreciate the support, I decided I'd do him a favor and attend his event.

I walked up the stairs to the Pearl Room expecting an empty space except for maybe 10 aging people sitting in widely spaced chairs.  This is what I actually saw: 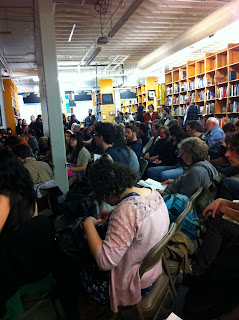 This represents maybe a third of the crowd almost all of whom were no older than 30.  Ie, the under 30's were there in droves. Apparently totally up on an older (63) punk rocker.  And I'd surmise, totally wanting to be one themselves.

He came in (rear, center walking through the door): 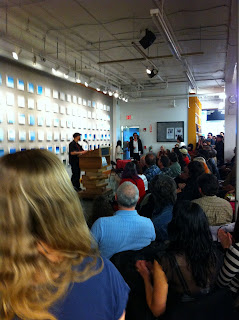 Read from his book which is densely and beautifully written. 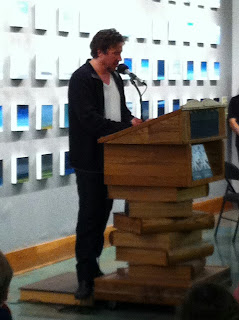 Then took questions which he answered with much depth and sensitivity. Sensitivity includes having contacted every living woman mentioned in the book before publication and asking her if she was okay with being included, would like an alias or to be removed from the book.  At one point he referred to a small, private reading in New York before the book came out - which I believe was probably attended by Dean Wareham.  Small world. 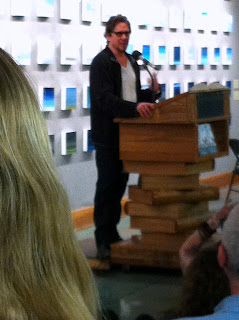